Could we get the following:

Hmm, mixins should be getting imported along with other objects from the upstream project… Do you have an example project I can debug with, and just to sanity check, the mixins are in the published version that was subsequently imported/updated in the downstream project?

Also, it should be possible to switch your default styles to using the ones that are defined in an imported project

All that said, I do also think it would be nice to use mixins in default styles!

For 4, we are working on branching as a first class feature in general

@yang for the mixing import, I am trying to export “test export mixin” from https://studio.plasmic.app/projects/mrgn3VC2r6s7VB3wKPe7xp to https://studio.plasmic.app/projects/k5wi36LTCNmnJb5rh2sgis, but I cannot see the mixins section in the sidebar… however I see now that the mixins are available regardless when trying to add a mixin to an element. I was confused here, because for other exported properties, they show up in the sidebar (see screenshot)

We are using default styles exported from the project. This is working well.

(Btw: you guys are doing amazing work, and I highly appreciate how you are interacting with the community) 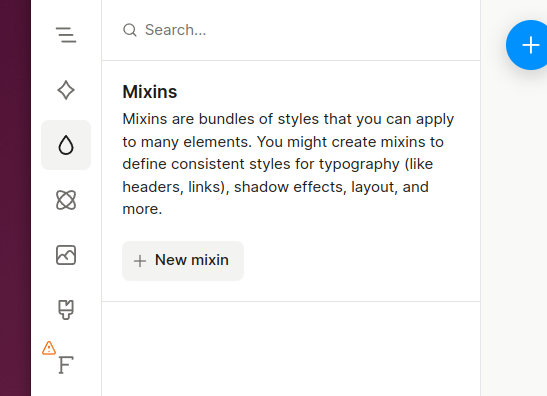