How to import pages across projects?

I’m trying to import a page from one project to another.

Ok so I managed to import the top level components from the other project. It does seem that they become editable once the dependency is disconnected.

However, when importing the components, there’s a conflict between breakpoints. Both projects have a single breakpoint with the same width value.

When I import, I’m given the ability to override the main project’s breakpoints; if I choose yes, the parent project’s mobile variants go all funny. If I choose no, the imported components get broken in the same way.

So for an existing project, how can I transition this so that nothing breaks? Right now both projects already have identical breakpoints.

@chungwu so I get this when trying to import:

But these are the breakpoints for the two projects 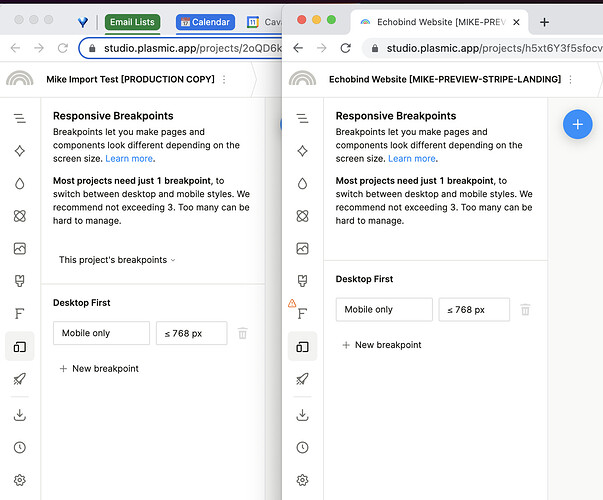 looks like it should work… when that modal pops up, click “Cancel” (we should word this better). And then you can make a copy of the component you want, and then detach the imported package.

That much works - but the mobile layout isn’t preserved when importing the component. Is this because of the plasmic host being localhost? 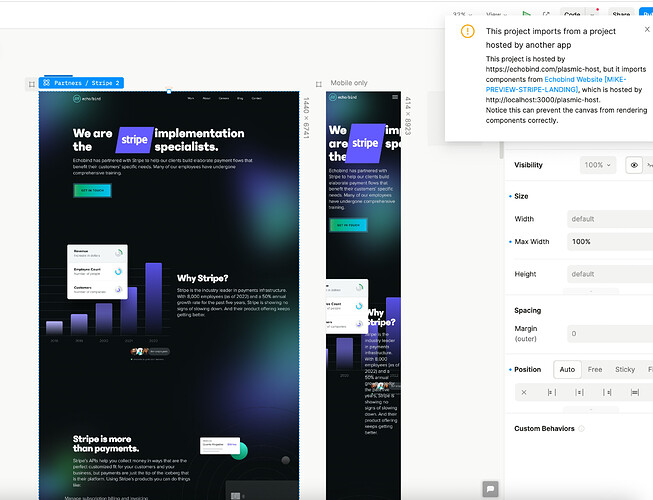 @chungwu Hey Chung did you see anything on your end? Right now I’m kinda stuck and need to launch this page soon…and hopefully not rework it in the live project

Hi! We just pushed a fix; could you try the above again?

Is #2 because it’s trying to use the old breakpoints first (and they don’t exist in the parent project), then it starts using the parent’s breakpoints after disconnect?