I’m embarrassed to ask this question, but where can I get the YouTube component? Is there a library somewhere?

I found the tutorial with the component already included but I need to import it into my existing project.

It’s not built into the studio at the moment

You can set it up as a custom code component; do you already have custom app hosting set up? https://docs.plasmic.app/learn/code-components/

But beyond that, it’s not clear to me how to make the component visible to the builder.

Ah great! Actually we have a helper to help you register the react-youtube component. You can do this:

OK, much better progress. At this point, I’ve:

I promise to writeup a gist for this if I get it working. I understand that your time is valuable.

ah hmm, have you done this part yet? https://docs.plasmic.app/learn/app-hosting/#add-a-host-route

ok, it look like I’m close now, but there does seem to be an issue with the fact that localhost is served over non-ssl while the plasmic UI is ssl.

Even closer now. Looks like it was important to remove the http:// prepended on the input field.

Oh, wow! It showed up in code components…yeah!!!

Next question. There appear to be props that I cannot disable: “Related Videos” for example. Is there anything I can do to override this behavior? 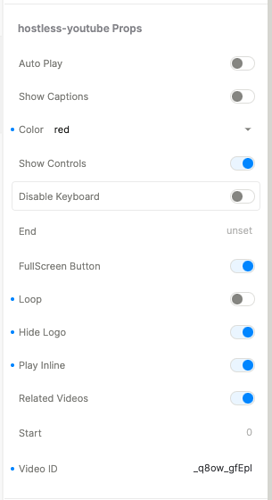 Bill, in the index.tsx of the react-youtube package you would want to comment/remove the following code that creates the Related Videos prop: (Starts at line 173)