Any performance concerns with hiding entire desktop version of page?

I’m wondering if this has an effect on performance. I know any content that is hidden in Plasmic is not rendered, so I think I’m good. But I wanted to get your input.

note that animations I run in code (that I want on the smartphone breakpoint as well) are then applied to twice as many elements.
But since the duplicates are hidden I hope that doesn’t affect performance.

Hey Johannes! If it’s not rendered it should not affect performance.

not rendered is the default option when something is hidden, right?

it is not… display: none is the default…

not rendering used to be default in the past.
and you were able to see the actual state in Plasmic Studio.
I wonder why you changed that.

it’s because for sites, you often want display:none so that visibility is toggled by css instead of by javascript. But for apps, you do prefer not rendered instead

A simple dropdown under Default Styles would solve the problem.

Hidden elements are: [Not rendered ↓]
*unless specified otherwise 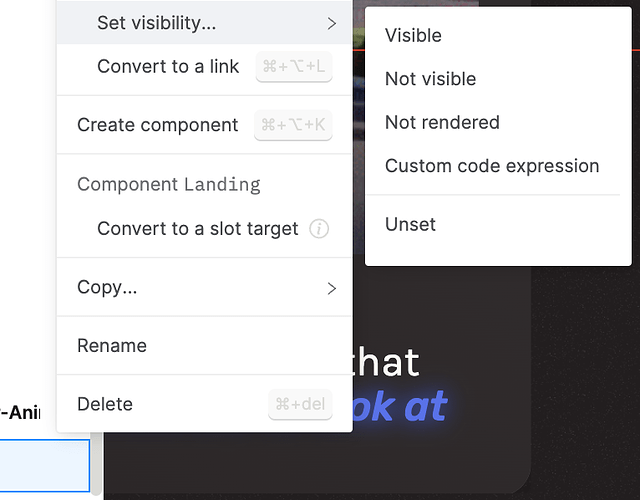 and please: communicate what the current state is. A hover tooltip would suffice.

also: “Custom code expression” doesn’t seem to do anything.
could also use a (i) with tooltip to tell users what it’s for