Hey all! Tried setting up plasmic with gatsby / react. I’m getting the following issue when I add the preamble script to my header:

Hi Lucas! You should be able to run it without preamble the script for now. We are removing it from our docs and have improved studio to no longer require it

Please LMK if anything goes wrong after you remove it

So no need for plasmic-preamble or plasmic-hmr ? Code components that I had showing before, don’t show up anymore. Also moved from localhost to a hosted URL.

Oh nvm, it’s showing up now. I guess it usually takes a while?

hmmm plasmic-hmr is still needed when running the app in dev mode (maybe it’s no longer the case after moving to a hosted URL?)

HMR can make the artboard’s loading a lot slower due to limited number of connections, so this script disables it

I’m following everything from this tutorial here, but had to remove it and manually add the preamble into my html file or else I’d run into the invariant error above. I’ll try including plasmic-hmr in my html file and see if that works with no errors 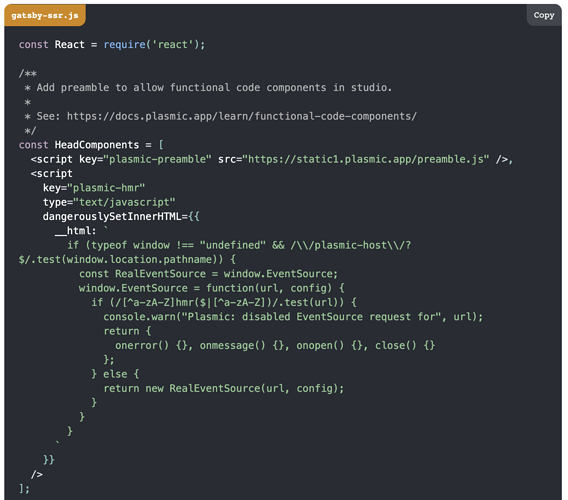